a cute mother's day gift (for myself)

So, an unfortunate little bit of news about me is that once in a while I like to watch reality TV.  With four kids, I don't get a lot of time to myself, but after the kids are all tucked in at night on the couch before heading upstairs, sometimes I get a bit of time to myself to zone out and entertain myself watching TV.  It's so good.

Anyway, the worst of the worst is obviously the family that spearheaded the whole movement (at least I think they did): the Kardashians.  And I'd be lying if I said I haven't ever seen the show, because I wouldn't be writing this blog post were it not for them, so thank you, Kardashian family.  People may love to hate you, but I love to love you.  Just don't tell anyone because I have a reputation to uphold.  Just kidding, I don't.

In the show I most recently watched, Khloe was wearing this shirt: 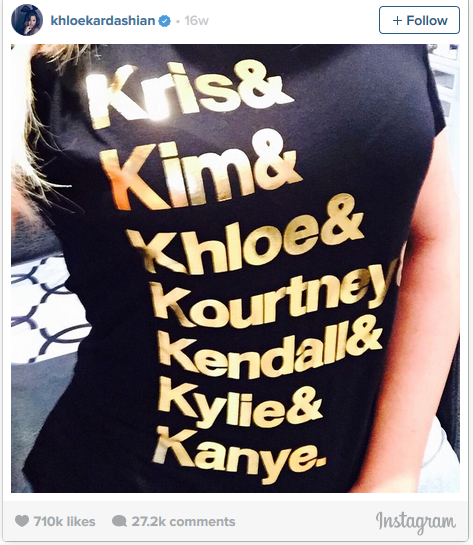 The shirt garnered a bit of attention, as almost everything that family does does.  If you'd like to read up on that, here's a link from the Wall Street Journal - just kidding again, it's from US magazine.  (Same thing):

I enjoy this shirt.  I wish I had a family of names centered around a single letter.  Actually, I don't.  But I do enjoy this shirt.  Also, I'm probably not the only one that likes the shirt because I'm now realizing that there are 710K likes of this photo on Instagram.  Holy cow, people.  Holy cow.

So, initially I hopped on the internet and started designing this shirt on customink, which is a website where my friend recently ordered shirts for a road race we'll be running next weekend.  But I grew frustrated that I wasn't making it well enough to have it look exactly like the shirt, so I tried to see if I could find a site where I could knock off the exact shirt but with my own family's names... and I found one!  2015 is awesome.  The internet is awesome.

I ordered the shirt already but I don't have it yet in my hands, so I'll post it once I receive it, but you guys!  I'm so excited!  I'm so cool, right? :)

I may be the first person (or may not be) to have thought of this, but I think it would be cute for families or best friends at school... I'm happy to send you to the site where I ordered the shirt in the hopes that the good karma in the world sends something nice my way.  Make your own, people! 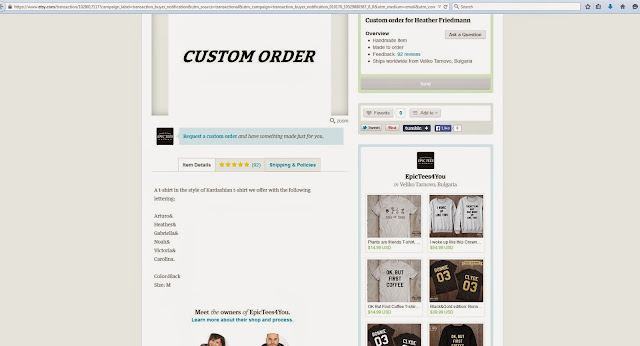